Congress JD(S) in Karnataka to Collapse after election?

Will Congress-JD(S) Collapse in Karnataka? Karnataka, the only south Indian state where BJP has presence, has always given about 15-20 MP’s to BJP since past two decades. Even at the height of Modi wave in 2014, BJP had won 15 out of 28 seats. In 2018, during Karnataka assembly election BJP fell short of majority and there by handing over the Karnataka government to the Gathbandhan of Congress-JD(s) . Since then BJP has been trying everything to over throw the government and it believes that winning about 20-22 Lok Sabha seats in current election will also guarantee them throne of Karnataka.

What is happening for the Congress JD(S) in Karnataka?

In Lok Sabha 2019, Karnataka is the only south Indian state where the voting was held in two phases and in rest of the states only one phase of voting was concluded. However, in both the phases voter turnout was higher than the previous election where Mandya stood out in a big way by crossing the 80% mark, possibly because of the fierce competition between Ms Sumalathaa Ambareesh (Independent) and Nikhil Kumaraswamy, son of Karnataka CM HD Kumaraswamy.  The higher voter turnout is often linked with the anti-incumbency factor but we often fail to link it with the high voltage campaign by the candidates or due to the sympathy wave towards a candidate. Now let us analyse how Karnataka has shaped up in this Election:

Since the past few days, many Kannada news channels have been conducting a lot of interactions with people from different parts of Karnataka to get a glimpse of the ground level situation in Karnataka.

Especially after the Balakot airstrike, Modi’s ratings have gone even higher. Even in traditional Congress bastions like Tumakuru , Chikkabalapura and Kalburgi, there is a strong pro BJP sentiment and heavy anti incumbency against the Congress candidates. In traditional BJP strong holds like Bangalore, the support has reached greater heights. Literally the the surveyor struggled to get some one who supported Congress or Rahul Gandhi and even those who may be supporting Congress where shying to tell it openly.

But will BJP be able to do well considering the formidable alliance ?

We have to remember that Karnataka is currently the only state along with UP which has a Mahagathbandhan (MGB) in place. It is literally a BJP vs Rest like scenario. Also Karnataka has elected 13–19 BJP MPs consistently since the past 2 decades, while in rest of the states, it’s performance has considerably varied. So Karnataka is currently the most consistent pro BJP state in National Level  and this is not expected to change this time as well, dispite Congress-JD(s) aligning together.

Many might be tempted to add the vote shares of the Congress-JD(s) and declare that BJP would be heavily defeated. Fortunately Politics in Karnataka is not that simple. However one should remember in politics 1+1 is not always 2.

So what may be the scenario of Karnataka after the polls

Let us try to analyse by considering predictions from twitter that has been tweeted after the end of Karnataka election.  These are opinions of these handles and the article is not endorsement of their predictions. Most have been retweeted, liked or commented much more than other such predictions.

Going by seat by seat calls, here’s the final outcome of Karnataka

However, going by overall mood and possible voteshare, here is the most likely outcome(my final postpoll projections)

Cong's votes are concentrated in Gujarat like BJP's in Karnataka.
Plus some of urban seats BJP won with huge margin, So votes got wasted.
Thats why u see even after BJP got > 8% lead in 2017 VS, still won only 18 seats > Cong.

If the Same Vote % in LS, then

To sum it up, there are wide range of predictions where BJP appears to be doing quite well in some and not doing well in other cases. On other hands few pollster are giving to Gathbandhan in Karnataka over BJP.

Coming to the CrowdWisdom360 prediction market, BJP to win 18-20 Seats has  seen a steep rise 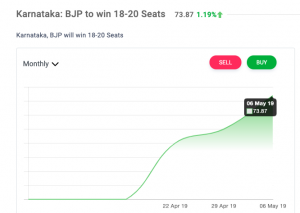 After analyzing all the surveys from different platforms and pollsters, it is clear that BJP may  be able to repeat 2014 in 2019 in Karnataka. The future of Congress-JD(s) alliance in Karnataka seems to be solely dependent on result of this Election. If in case BJP manages to get over 20+ seats, we may see a new government in Karnataka assembly as well after 23rd May.

One thought on “Congress JD(S) in Karnataka to Collapse after election?”

Read the latest forecasts in less than 5 minutes