My parents had recently gone to Prayagraj for Kumbha Mela. They also visited Ayodhya, Varanasi and other important pilgrim centers in UP.

One thing was very clear. Modi and Yogi used to feature mainly in the talks of the commoners of UP.

All the pilgrims there had to say only one thing.

“This is the best managed Kumbh ever”.

Many could be heard comparing this year’s Kumbh to the one during Akhilesh’s time. And I leave it to the readers to decide who carried it out better. 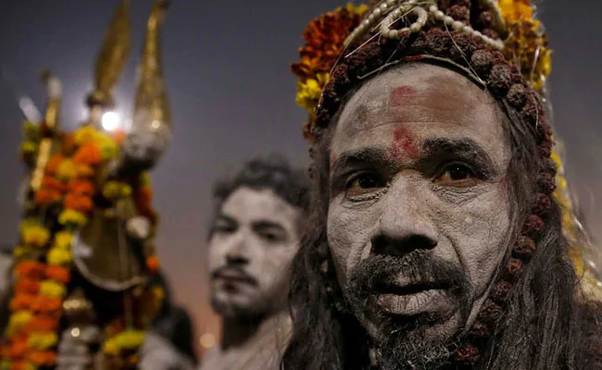 The Prayagraj Kumbh Mela 2019 has secured place in the Guinness Book of World Records for the largest crowd management, largest sanitation drive and largest painting exercise of public sites, the government said in New Delhi on Sunday.

Seeing the cleanliness maintained in Prayagraj dispite 2.5 crore people being present on the day my parents attended Kumbh, my mother told that she was literally shocked (especially comparing with UP before Yogi.)

So BJP is definitely in the race to win majority of seats.

For all those who think that Mahagathbandhan will win majority of seats in Uttar Pradesh citing by poll losses must remember that the bypolls had very less voter turn out. Infact, extremely low ! 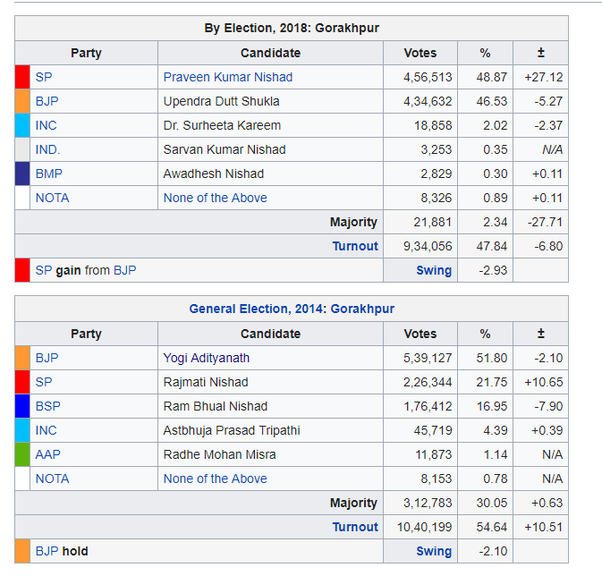 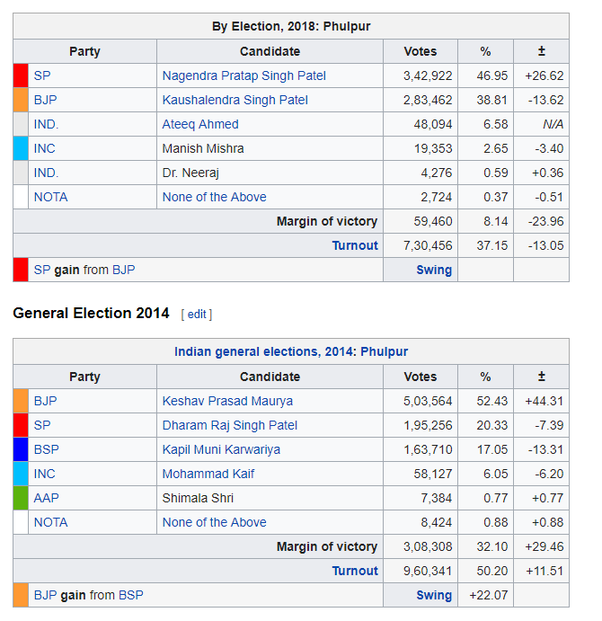 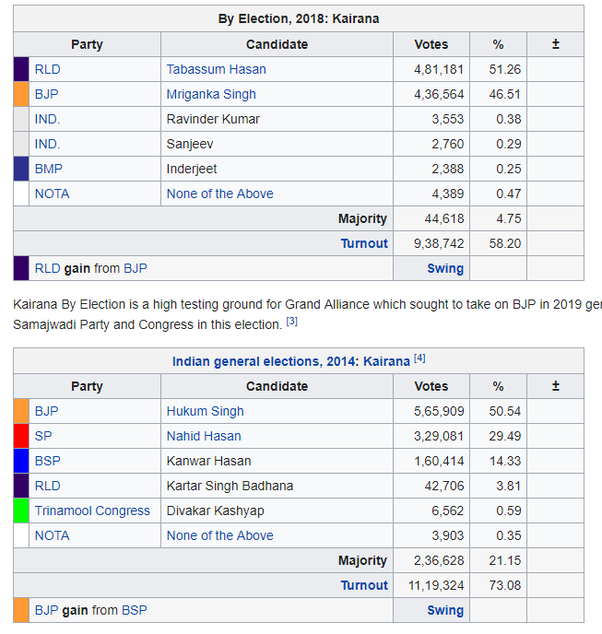 If you see the turnouts for bypolls versus 2014, it is 47,37. pathetic indeed. It beats even Bangalore which is famous for extremely low voter turnouts.

And the thumb rule is that BJP depends heavily on new voters and wave like situations to win. Which implies that voter turnout is extremely crucial for BJP

Higher the voter turnout, higher the chances of victory for BJP. When my parents had gone to visit Nepal, Gorakhpur Bypolls were around the corner and the train had passed though Gorakpur.

They told me that they were literally surprised to see very few/no banners, campaigns,etc by Yogi or BJP in general. No wonder voters too did not bother to come out and vote.

And Yogi was not happy with BJP’s candidate for Gorakpur. It’s a known fact that he was busy campaigning in Karnataka rather than campaigning in his own state which clearly showed that there was a small amount of infighting too within BJP.

The margin can be easily bridged by BJP. With improved voter turnouts, the gathbandhan can even be easily defeated !

All those who say that Mahagathbandhan will win majority of seats in Uttar Pradesh citing the solid caste based coalition they have, let us examine that as well.

With Priyanka Gandhi, a small but significant percent of them will definitely vote for Congress. But still majority will still go with Mahagathbandhan.

Divided into Jatavs and Non Jatavs. Jatavs form about 9-10% of Population of UP or 50% of Dalit population. Undoubtedly they will rally behind alliance. But Non Jatavs Dalit castes like Pasis, Koris, Valmikis and others are not behind Mayavati. And BJP can be expected to corner most of these votes since Congress lost it’s appeal among Dalits here long ago.

They mostly rally behind SP and this is expected to Continue except in some areas against specific BSP candidates.

It is a 50–50 case for both RLD and BJP unlike last time when BJP had cornered most of Jat votes due to Muzaffarnagar riots.

Now for the most important grouping,

But the single largest caste and the single most important community is the Brahmin community.

Brahmins amount to almost 12–14% (including 2–3% Bhumiars) of total population of Uttar Pradesh . But what makes them more important is that Brahmins are the most influential community of all. I am not telling it. A BSP MP himself once said it.

It is Brahmins who generally set the tone and agenda in tea shops or any public places were politics too comes into picture in some way or the other. After RSS, undoubtedly Brahmins indirectly influence people the most.

No wonder Brahmins and smaller OBC communities have voted together historically.

That is why BJP is strong in all areas where Brahmin+OBC voters are high. Be it Karnataka, Gujarat, UP , MP or Rajasthan, BJP’s principle voters are Brahmins+OBCs.

That is the same reason, Congress is insignificant in UP. It’s decline was mainly due to Brahmins dumping it for BJP in 1990’s. Due to which it lost even many OBC votes.

In the recent Rajasthan, MP and Chattisgarh elections, the Brahmins were undoubtedly angry with BJP. Even OBCs were angry with SC/ST act. So not only BJP lost Brahmin votes but also lost a large part of OBC votes as well.

But can a simple addition of caste votes be appropriate ?

Will all Yadavs vote for a Jatav candidate or vice versa ?

Can a Hindus vote for a Muslim candidate ?

Will all Brahmins+OBCs vote for BJP ?

The BSP was quick to recognize its importance — backed by the realization that while Jatavs have had a long history of violent conflict with Thakurs, Jats, Yadavs and even Muslims, they’ve perhaps never clashed with Brahmins.

Simple addition is not possible ! Complete vote transfer cannot be expected between SP and BSP.

They both fundamentally represent different sections of society (Dalits and OBCs). And we have to remember that Muslim consolidation can lead to a counter Hindu Consolidation in UP.

At the same time BJP cannot expect all Non Jatav Dalit , Non Yadav OBC and Brahmin votes. You cannot ignore the fact that even some Brahmins can vote for Congress seeing Priyanka ! And many Jatavs, Yadavs who are supporters of BJP will vote for BJP.

But numerically BJP still has the advantage with the large Brahmin+OBC+Non Jatav Dalit+Other Upper Caste voters behind it. The EWS reservation has solidified Brahmin support. And most importantly BJP has learnt from the mistakes it comitted during the elections in MP, Rajasthan.

Even if it doesn’t get all of their votes, it still has 40% of votes and Mahagathbandhan too comes behind closely.

Lastly , seeing the spectacular handling of the Pulwama attack, BJP is in an even stronger footing. And we have to remember that UP contributes massively to army. So this has definitely caused problems for Opposition. That is why they can be seen questioning the strikes. They want to desperately downplay the strikes.

Seeing all this, we will be in for many surprises.

Definitely BJP will not repeat it’s spectacular performance of 2014 in Uttar Pradesh . But it will definitely not perform as badly as surveys predict.

So according to me

UP Lok Sabha: Predict the seats and win 5000 rupee

I seriously doubt Rahul will be able to retain Amethi. Not only Congress lost badly in all Assembly segments in Amethi in 2017 ,but also Rahul is loosing appeal. And he ran away to Wayanad.

Smriti Irani is doing lot of work there. Recently even Modi campaigned here. So it will be a very tough time for Janeu Dhari Rahul. Even if he wins, it will be due to pure luck.

Unfortunately all my political predictions have come out to be true. I sincerely hope that I am proved wrong and BJP gets 70+

Read about UP and Bihar Lok Sabha Prediction

In our prediction market, BJP winning 25-36 seats in UP saw a slight decline.