Sumalatha to defeat Nikhil Kumaraswamy ? Mandya Lok Sabha Constituency is going to be one of the most interesting and also one of the most closely fought elections in electoral History of India.

Historically a Congress fortress , some decades ago was breached by the Janta Party. Later became a backyard of Deve Gowda and his family. This time, politics in Mandya (aka Family politics of Deve Gowda) is being challenged by Sumalata , wife of late Rebel Star Ambareesh who decided to contest as Independent after being denied a ticket by Congress.

Vokkaligas are the single largest community here and they form a whooping 50% of the electorate. SC/STs come next. Also there is a significantly large Kuruba, Veerashaiva and Brahmin populations. Minority population is less at about 5%.

Mandya has the highest overall Hindu population in Karnataka at 95%.

While SC/STs , Kurubas,minorities and a section of Vokkaligas rallied behind Congress.

Since Brahmins and Veerashaivas are not that a dominant force in Mandya, it is Congress and JDS who have been the main players till now.

But like other places, Congress has been declining even in Mandya with BJP being the main beneficiary. Currently Congress has no tall Vokkaliga leader other than DKS after loosing late Ambareesh and S M Krishna, CP Yogeshwar (to BJP).

Sumalata though not a Vokkaliga herself, she still could have revived Congress’s fortunes in Mandya had Congress not made a pact with JDS. But fate had it the other way.

Congress has literally killed itself in Mandya by giving it to JDS. The bypolls showed that even traditional congress voters won’t mind voting for BJP which even now does not even a proper base here !

Votes polled by BJP in 2018 was actually a great achievement according to me. 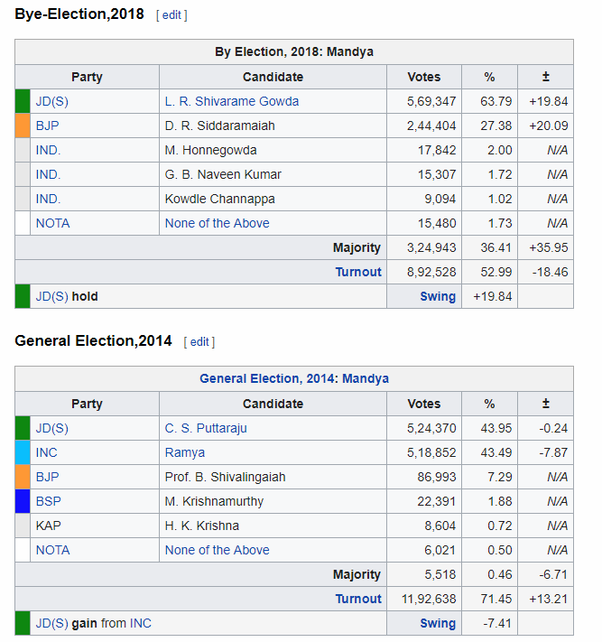 JDS-Congress rivalry in Mandya is legendary. For Congress supporters and workers here BJP is a better option than JDS !

Had BJP participated, then the anti JDS votes would have been split between BJP and Sumalata thereby helping JDS.

That is why BJP has decided to support her instead. With SM Krishna of BJP (one of the tallest leaders of the Vokkaliga community ) too campaigning for her, Vokkaliga votes will split.

With Vokkaliga votes going to be split between Sumalata and JDS, the SC/STs, Kurubas, Libra ( Brahmin and Veerashaiva-Lingayat) votes are going to ultimately decide the fate of the candidates. With BJP backing off and Yeddy (he is from Mandya itself !) expected to campaign, Libra votes will undoubtedly go to Sumalata. So the fight is now for getting SC/ST votes and Kuruba votes.

Karnataka, though, it is not like other South Indian states where film stars can significantly change minds of voters , still film stars Yash and Darshan campaigning for Sumalata can help a lot since each and every vote will be crucial.

So a smart move by BJP by backing off and giving open support.

Though Sumalata is at an advantage currently , it is still a 50–50 contest. Time will tell whether Sumalatha to defeat Nikhil Kumaraswamy ? OR not.

Visit our prediction market and pedict the number of seats BJP winning in Karnataka.