YOGI the successor to MODI ?

Will Yogi Succeed Modi ? In 2017, Yogi Adityanath sat on the throne of India’s largest state, in terms of electoral representation, Uttar Pradesh, after BJP won with thumping majority, winning 325 assembly seats out of 403 seats. Infamous for his hate speeches or religiously motivated speeches a question was raised about his selection to lead a state having almost 20% Muslim population. However Prime Minister Narendra Modi bestowed his trust upon 5 times parliamentarian, Yogi Adityanath to lead a state which has always been deprived of development and which has always been famous for religious riots. Today it has almost been 2 years since Yogi Adityanath took over power of Uttar Pradesh added to it we are in the middle of election for the supremacy over the “Throne of Delhi Sultanate.”

Recently, in an interview to a main stream media channel, PM Modi mentioned that Yogi has single handedly decimated the two power houses of Uttar Pradesh, BSP and SP. So was it an indication by Modi for his successor or was it just to grab the media attention towards the works of Yogi Adityanath in Uttar Pradesh. Let us try to understand why Yogi could succeed Modi:

Uttar Pradesh, a state with about 20 crore people, has always been in the bad books when it came to law and order. Every second day, state was hit by some “Politically motivated” religious riots. So, what changed after Yogi became CM?

Gujarat has always been regarded as a model state and PM Modi has always talked about development of Gujarat and “Vibrant Gujarat.” In line with Gujarat, an investor’s summit was held in Uttar Pradesh in 2018 which opened the gates for the investors to invest in Uttar Pradesh and in exchange Yogi guaranteed safety of their firm and employees. The state signed MoU’s of about 4.28 trillion rupees. This was evident about the improvement of law and order in state under leadership of Yogi Adityanath.

In the field of education Yogi’s government have taken a far-sighted step. Uttar Pradesh has always been famous for it infamous activities when it comes to education revolution. The state has been in news for its creative forms of cheating during board examination. Thus, to make exam cheating free Yogi’s government installed CCTv Cameras in exam centers, promoted meritorious students and not only this his government also took steps toward the modernization of Madrassa system which was becoming irrelevant due to lack of modern form education.

However, are these enough to consider Yogi to succeed Modi ? May be yes! May be no!

In 2014, BJP on its own won 71 seats out of 80 Lok Sabha seats in Uttar Pradesh. It is always said that road to the throne of Delhi passes through UP and the party that wins UP wins Delhi. Thus, the future of Yogi Adityanath now solely depends on the 2019 Lok Sabha results and at this point of time road to Delhi for Yogi doesn’t look to be easier. Let us look at the couple of predictions regarding Uttar Pradesh

First, we begin with some of the key Uttar Pradesh predictions on Twitter (after 4th Phase) of election. These are opinions of these handles and the article is not endorsement of their predictions. Most have been retweeted, liked or commented much more than other such predictions.

Got info from a few Journalists of an leading Hindi daily.
As per them BJP figures:
UP 50+
Gujarat 23+
Rajasthan 20+
Bihar 16+
West Bengal 15+
Chhattisgarh 4+
Overall BJP alone 260+
It seems game over for Congress and its sick allies.
NYAY has been a BIG DISASTER

Of 13 UP seats going to poll today, BJP had won all but 1(Kannauj) in 2014
Heres how 2014 would look with Mahagathbandhan scenario (BSP+SP): 7-6 in favour of MGB
and then there are small matters of 5 intervening years, new voters and vote transfer between alliance partners pic.twitter.com/K45bRRZYpj

In sum, there are wide range of predictions where Mahagathbandhan appears to be doing quite well in some and not doing well in other cases. On other hand few pollsters seems to be giving all four phases to BJP.

Coming to our prediction market, BJP repeating 2014 numbers is doing slightly better however chart has something else to tell about future of BJP in Uttar Pradesh for the upcoming election. 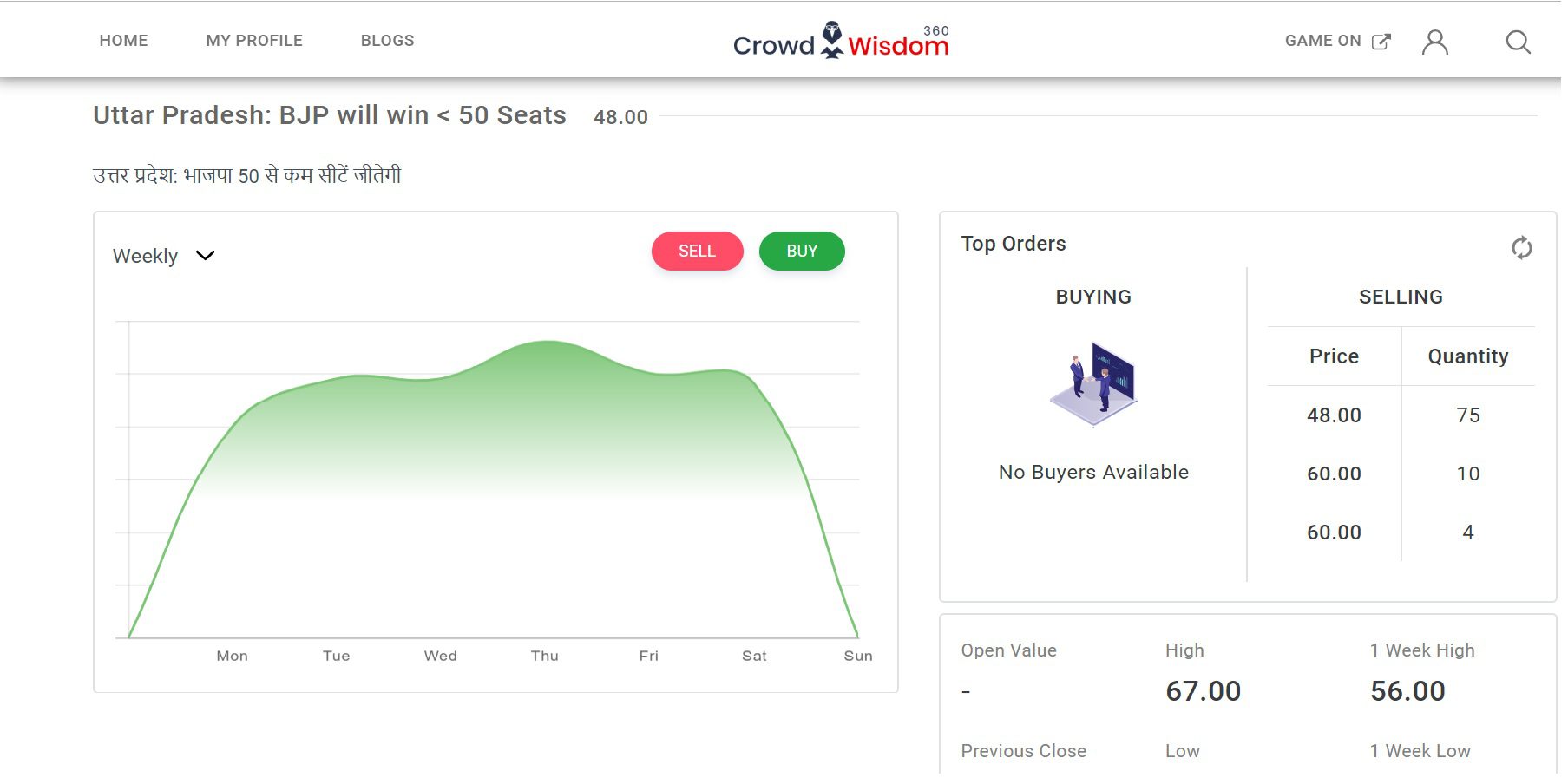 On our prediction platform,

That takes the alliance tally to 32 to 37 seats

Read the latest forecasts in less than 5 minutes