Who is winning Lok Sabha 2019? Every election in India is undoubtedly important as it decides who will run the world’s largest democracy for the next 5 years. In 2014, after 30 years, one party got majority on its own. BJP under the leadership of Narendra Modi was able to occupy the center of Indian politics. Five years down the line, several things changed- from Pappu to Chowkidar Chor haii- Indian politics attained the different level of prosperity. Now we are once again voting to choose the leader who will be leading the Indian democracy for next five years.

Since independence we have had 16 Lok Sabha elections and this one being the 17th, however the issues of our elections have always remained the same. “Garibi Hatao” is yet to get “NYAY” and “India shining” is now “Make in India.” What changed in all these years? As a citizen we got to experience the change in the faces of leaders and their ideologies. This election is again being fought on similar issues- unemployment, scams and caste. This tweet sums up how the Lok Sabha 2019 is a polarized one-

thread :#LokSabhaElections2019 is heavily polarized only on 2 issues.
1. those who r earning sufficient money will vote for modi
2. those who r jobless(youth+farmer+traders) will vote against modi
3. SC ST OBC upper caste vote bank all r just propaganda nothing will be counted

WHO HOLDS THE POLE POSITION IN THIS ELECTION?

The election to 17th Lok Sabha began on 11th April and we are near about to the end of  the election with only 2 phases remaining. Every political party have come up with their own Election manifestos in order to lure the voters. Nationalism and national security have become the talk of every political manifestos. However it is the voters- who is although forgotten after election- decides the fate of politician.

The future of several politicians and the political parties is already sealed in EVM machines, which is often abused after every election result. However let us analyse which political party is leading after 5th phase of voting:

First, we begin with some of predictions on Twitter after 5th phase of voting. These are opinions of these handles and the article is not endorsement of their predictions. Most have been retweeted, liked or commented much more than other such predictions.

Now it is an increasingly plausible scenario that BJP is getting absolute majority on it is own, up from 260-265 levels a month back, a thread dedicated to what went right for BJP, which faced embarrassing defeats in 3 Hindi heartland states against 'weak' Congress, months ago.

My Final take on BJP seats so far in UP Loksabha election from 1st phase to 5th phase… pic.twitter.com/nDuotbMPiO

After analysing several different opinion from different credible handles, it is clear that none is able to predict what Lok Sabha 2019 result will be like. Now let us try to analyse what Crowdwisdom prediction market tells about the upcoming Lok Sabha election result: 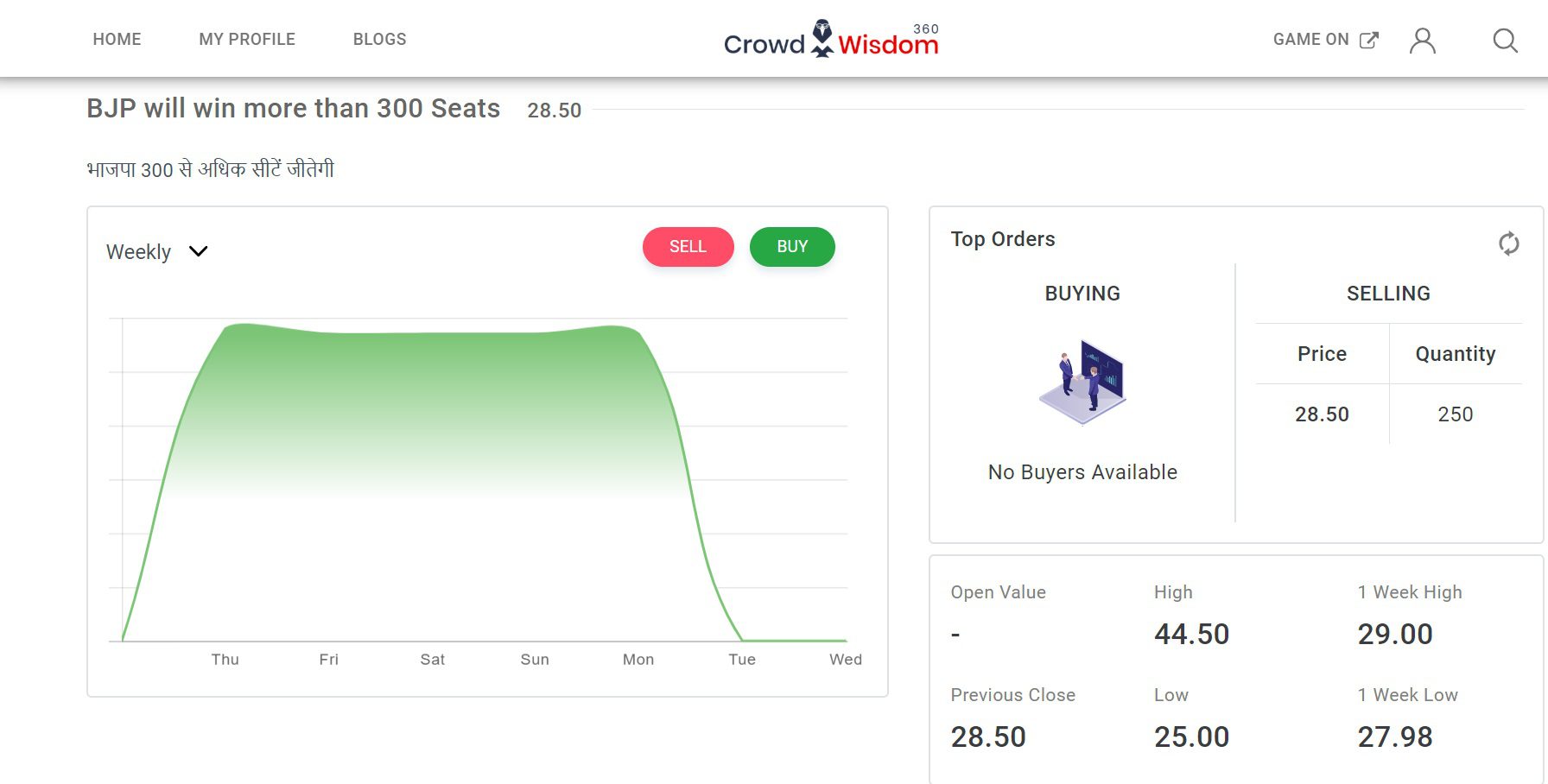 The Lok Sabha 2019 has turned out to be one of the most bitter fought elections. The results of the Election will infact decide the future of many political parties. The Indian election which usually used to be fought between two camps is now gradually changing into Modi versus rest. We are few days away from result day but before that every political pundits have already declared their own version of result. However the question still remains the same who is winning Lok Sabha 2019 ?